Queens of the Castle The Roses and Thorns of the Tudors 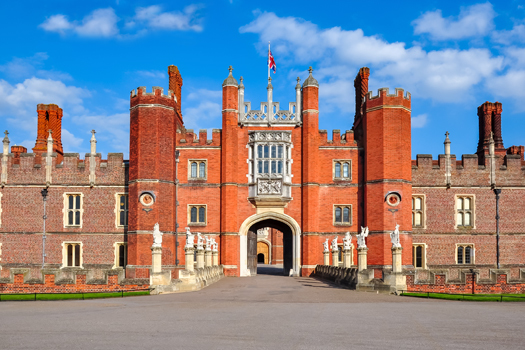 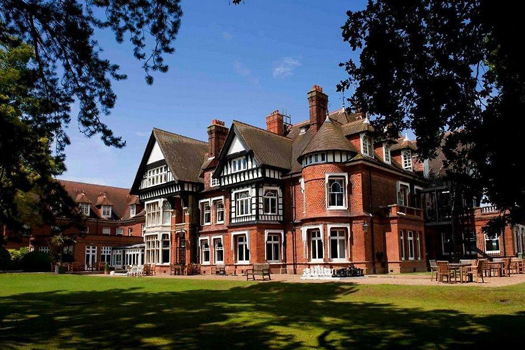 Queens of the Castle The Roses and Thorns of the Tudors

Aragon, Boleyn, Seymour, Cleves, Howard, Parr – divorced, beheaded, died, divorced, beheaded, survived. Everyone knows the fate of Henry VIII’s six wives, but on this fascinating tour we delve into their stories and celebrate the 16th-century queens after taking inspiration from the smash-hit phenomenon, SIX The Musical. There is so much to discover, from Sudeley Castle, the home and burial site of Katherine Parr, to Hampton Court Palace, where Catherine Howard was seized before her imprisonment at Syon House. The highlight of this tour, however, is our special experience at the spectacular Thornbury Castle, once owned by Henry VIII. We are treated like royalty with an impressive falconry display and a lavish dinner before staying overnight in the opulent bedchambers, the very place where the infamous Tudor king and Anne Boleyn stayed for ten nights in 1535! Although the individual women are often immortalized in history textbooks as the famous six wives of Henry VIII, they certainly take the lead on this tour as we transform history into her story.

On arrival at Heathrow airport, a private transfer will take you to the Woodlands Park Hotel, our base for the first five nights of our tour. In the evening join the group for a welcome drink, followed by dinner.

Yeoman Warders have been guarding the Tower of London since the Tudor times and today we are lucky enough to be met by one of these ‘Beefeaters’ outside the iconic landmark, founded in 1066 as part of the Norman Conquest. A grand palace in its early history, the Tower of London served as a royal residence but was also a prison for some of the country's most important political prisoners and is also where Anne Boleyn and Catherine Howard were executed. The Yeoman Warder sets the scene of these infamous events in British history before we have time at leisure to explore.

We then take a tour of Westminster Abbey with a Blue Badge guide, where its roots stretch back as far as the Benedictine Monastery of 960. Nevertheless, it was Edward the Confessor in the 1060s, and particularly Henry III in 1245, who transformed the church into what is now; regarded by many as England’s national church. Discover wonderful Gothic architecture, tombs and monuments of the rich and powerful, from 17 kings to many well-loved figures, including Shakespeare, Austen, Hardy, Dickens, and even those scourges of English schoolchildren, Chaucer and Spenser. This is also the resting place of Anne of Cleves, upon the orders of Queen Mary I, and Henry VIII married Catherine of Aragon in the adjacent St Margaret’s Church in 1509.

We then walk along the old site of Palace of Whitehall and take a peek at the Banqueting House from the outside, the only surviving part of the palace and the spot where Charles I was executed. The royal residence was ordered to be built by Henry VIII and was home to English monarchs from 1530 to 1698. It is also where Henry married Anne Boleyn and Jane Seymour, and is where he died in 1547.

We start our day in Greenwich with a visit to Inigo Jones’ architectural masterpiece, Queen’s House. This borough of London was the birthplace of Henry VIII and his daughters, Elizabeth I and Mary, and Henry VIII had two of his six weddings here. The house itself was the first Classical building in the UK and is filled with world-famous artwork and fascinating royal history. We enjoy a captivating Tudor history talk here before spending some free time in Greenwich.

Later, we are treated to a magical Bateaux London river cruise along the Thames. This is a lovely chance to take in London’s glittering skyline from a different perspective while enjoying live music and a seasonal three-course dinner. As we cruise past the Tower of London, look out for Traitor’s Gate, the entrance through which many Tudor prisoners arrived before they met their demise, including Anne Boleyn.

Our first visit is to Syon, a family residence for 400 years and the London home of the Duke of Northumberland. After being seized at Hampton Court Palace in 1541, Catherine Howard was taken to Syon and put under house arrest here. Following a lengthy imprisonment, she was taken to the Tower of London to be executed and when Henry VIII died five years later, his coffin rested at Syon House for a night before the procession continued to Windsor. This is also where Lady Jane Grey received the news that she would become Queen in 1553, so there are plenty of stories to discover around every corner here. With a colorful history, grand interiors, state apartments and the spectacular Great Observatory, our guided tour won’t disappoint, which focuses on the Tudors and Catherine Howard.

We continue to Hampton Court Palace for a dive into the fascinating world of the Tudor court during our guided tour. We experience the private life (and very public dramas) of Henry VIII, while we explore one of Europe’s most sophisticated palaces. We see Henry’s Great Hall and the Tudor kitchens, with time for a stroll around the enchanting riverside gardens – blossoming with flowers and grand Yew tree avenues. Imagine walking in the footsteps of the famous six wives, who were all brought to this opulent property, and look out for Anne Boleyn’s falcon badge in the Great Hall.

We head to Hever Castle, the childhood home of Henry VIII’s second wife, Anne Boleyn, where we enjoy a private guided tour. Dating back to the late 13th century, this double-moated castle is home to various historic artifacts including Tudor portraits and furniture, as well as two prayer books inscribed by Anne Boleyn. When Anne and nobleman Henry Percy became betrothed, Henry VIII ordered the marriage to be stopped and Anne was banished to Hever and later, the castle was bestowed to Anne of Cleves. In the early 20th century, the castle was lavishly restored by American millionaire, William Waldorf Astor. We discover more on our private guided tour of the house and gardens.

Our Boleyn theme continues with a visit to the historic village of Chiddingstone, where a visit here is like stepping into a Tudor time warp. Anne’s father, Thomas Boleyn, once owned the beautiful village shop, which has been trading for more than 400 years.

We head to Sudeley Castle, where we enjoy a fascinating talk on its history. With royal connections spanning a thousand years, Sudeley played an important role in many turbulent episodes of England’s past, from the Wars of the Roses to the Civil War, and it was once home to Katherine Parr, the last of Henry VIII’s six wives. She is buried in the 15th-century church within the grounds. Today the castle’s glittering interiors contain many fascinating treasures from Roman times to the present day, and it is surrounded by ten award-winning gardens and a 1,200-acre estate.

Later, we check in to the Greenway Hotel, where we stay for the next two nights. This hotel was a favourite of the late Queen Elizabeth The Queen Mother when she came to stay for the famous Cheltenham races.

Today takes us to Ludlow Castle, nestled in the stunning Shropshire countryside. Once a Norman fortress built to defend against the Welsh, it was extended over the centuries to create a royal palace. We find out more on our fascinating Tudor tour with a costumed guide, Lady Caroline. The castle overlooks the charming town of Ludlow, home to Catherine of Aragon while she was married to Prince Arthur, before she married his younger brother Henry VIII.

This morning we pass through Bisley to uncover one of the greatest mysteries surrounding Elizabeth I and her connections to the quaint Gloucestershire village…all will be revealed!

We continue to Acton Court, a fine example of a courtier’s house and one of the most authentic Tudor properties in England. In 1535, Henry VIII and Anne Boleyn came to stay here and in honor of the royal couple, owner Nicholas Poyntz added a lavish east wing to the manor house. Today, this wing offers a unique glimpse into the past, and we find out more with a guided tour of the authentic royal apartments. Look out for the King’s privy, discovered here after conservation work in 1994.

Later, the highlight of our tour awaits as we step back in time at Thornbury Castle, the only Tudor Castle to be opened as a hotel. The infamous king and Anne Boleyn spent ten nights here in 1535 and the beautiful Tudor castle was once owned by Henry. We see how he was entertained with a spectacular falconry display before eating like kings in a private area of the castle. We are also treated to a fascinating talk by Tudor expert Tony Cherry before staying overnight in the lavish bedchambers, boasting distinctive castle features and a traditional décor. In the morning, follow in the footsteps of royalty and explore the manicured lawns and landscaped grounds.

Today we visit Windsor Castle, the oldest and largest inhabited castle in the world and the final resting place of Elizabeth II. Established in the 11th century by William the Conqueror, it has been remodeled by successive kings and queens and is regularly used for ceremonial and State occasions. The magnificent State Apartments are furnished with some of the finest works of art to admire during our Blue Badge guided tour.

There’s also time to explore St George’s Chapel, the site of many significant weddings in British history and the final resting place of a host of famous royals. After dying from postnatal complications after the birth of the future King Edward VI, Henry ordered a queen’s funeral for Jane Seymour, the only wife to receive such a celebration. Jane was buried in St George’s Chapel and when he died in 1547, Henry was interred alongside her here.

Later we check into our overnight hotel, the Macdonald Windsor, and enjoy a farewell dinner together.

*supplement applies for transfers from all other airports and all other locations, including central London

Nights One to Five – Woodlands Park, Cobham
Woodlands Park is a delightful country house hotel located in Cobham, Surrey. Originally commissioned by industrialist William Bryant and built in 1885, the house was one of the first to have electric light in the UK. Today, the impressive hotel boasts two restaurants and relaxing rooms with excellent amenities, all set within landscaped grounds.

Nights Six and Seven – Greenway Hotel, Cheltenham
Nestled in the stunning Cotswolds countryside near the Regency town of Cheltenham, the Greenway Hotel is set within a 16th-century Elizabethan manor house. Enjoy fine dining in the award-winning restaurant, relax in the comfortable bedrooms or take the chance to unwind in the sumptuous Elan Spa.