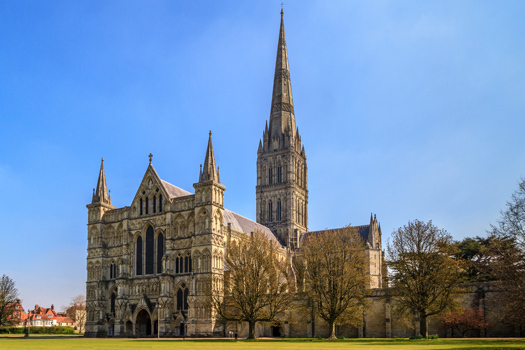 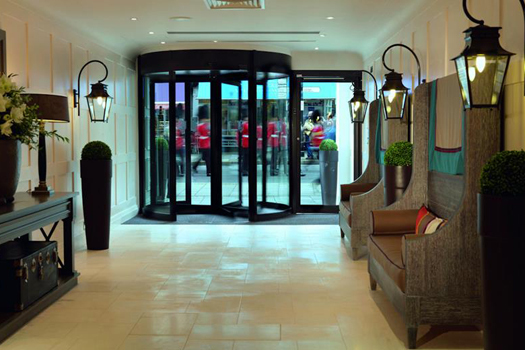 On this captivating tour we honor the heroic GIs who fought in World War II, follow in the footsteps of America’s Founding Fathers and go in search of the hidden English gems that are connected to the birthplace of ‘the Land of Opportunity.’ Our journey of discovery takes us to Sulgrave Manor, the ancestral seat of the Washington family and regarded as the original home of the Special Relationship, as well as Benjamin Franklin’s former London residence and even Gloucester Cathedral to pay tribute to John Stafford Smith, the composer of The Star-Spangled Banner. We also enjoy a Fourth of July gala dinner and celebrate the Mayflower’s 1620 voyage with a special cruise in Southampton, where the famous Pilgrims embarked on their epic transatlantic journey.

On arrival at Heathrow airport, a private transfer will take you to the Macdonald Hotel, our base for the first three nights of our tour. In the evening join the group for a welcome drink, followed by dinner.

We begin with a visit to Grosvenor Square, the former home of the US Embassy. During World War II when the Chancery was on one side of the square and General Eisenhower’s headquarters on the other, it became known as ‘Little America’; almost the beating heart of the American Armed Forces in Great Britain. The USA’s connections span back even further as the house of John Adams, the second President of the United States, can also be found here. We take a moment to reflect at the monument to the American Eagle Squadron pilots of World War II, the Eisenhower Statue and the 9/11 memorial.

Our next stop takes us to Benjamin Franklin’s House for a fascinating guided tour. Situated in the heart of London and built around 1730, this is the only remaining Franklin home in the world. Still boasting many of its original features, the Founding Father of the United States lived at this property between 1757 and 1775 at a time when he was involved in the mediation between Britain and America.

We continue to Temple Church, built by the Knights Templar in the late 12th century as their English headquarters and hidden away among London’s Inns of Court. During King John’s reign it served as the royal treasury and much later, the church was greatly restored after being heavily bombed in World War II. This architectural treasure is also known as America’s Church in London thanks to its connections with the USA.

A well-deserved lunch awaits at the oldest pub on the River Thames, The Mayflower, located in the London district of Rotherhithe. The restored 16th-century pub is named after the famous Mayflower ship, chartered by the Pilgrim Fathers, whose first stage of the epic voyage began in Rotherhithe. Captain Christopher Jones allegedly moored here to avoid paying taxes further down the River Thames before continuing to Southampton for supplies.

This afternoon we head to the nearby St Mary’s Church, the site of Christian for over 1000 years. Designed by John James, an associate of Sir Christopher Wren, it is renowned for its deep roots in British maritime history. This is the church where Puritans are believed to have prayed before the Mayflower’s departure, and there is a memorial to the ship’s captain, who is also buried in the church grounds. On the 375th anniversary of the voyage, a sandstone sculpture was unveiled, bearing the words: ‘To the memory of Christopher Jones 1570 - 1622, Master of the Mayflower. He landed 102 planters and adventurers at Plymouth Massachusetts 21 Dec 1620. They formed the Mayflower Compact and the first permanent colony in New England.’

Our first stop is the riverside site of Runnymede. Widely regarded as the birthplace of modern democracy, this is the very spot where King John signed the Magna Carta on June 15, 1215. This royal charter provided the foundation of many American constitutional documents, including the United Bill of Rights, the United Nations Universal Declaration of Human Rights and many more, and there is also a memorial to John F. Kennedy here.

We continue to Cliveden for a fascinating guided tour of the luxurious manor, set high above the River Thames upon almost 400 acres of National Trust grounds. Built in 1666 by the 2nd Duke of Buckingham, this stately home has remained a pinnacle of glamour for the upper-class. We explore the striking period features and antique interiors while we learn all about Cliveden’s links with America and about the most infamous scandal that shook the British parliament and played out on these very grounds, the Profumo affair. Afterward, we indulge in the quintessentially British tradition of afternoon tea.

Back at the hotel this evening, we are treated to a fascinating talk by a guest speaker.

Day 4
Saturday: In the Footsteps of the Mayflower Walk and SS Shieldhall Cruise

We head to the vibrant city of Southampton for a fascinating walk entitled ‘In the Footsteps of the Mayflower’. We visit SeaCity Museum to explore the Gateway to the World gallery and see how the city’s port has developed since the Roman times. Not only has the Mayflower set sail from Southampton, but other famous ships such as Titanic and Queen Mary have departed here. We find out more as we walk through the city’s Old Town, discovering historic vaults and towers and learning about Southampton’s connections to the Pilgrim Fathers.

Next, we board the SS Shieldhall, the UK’s oldest steamship, and retrace the start of the Mayflower’s initial route over 400 years later. A special way to spend the weekend before the Fourth of July; you are also welcome to visit the Engine Room and Boiler Room and can even meet the Captain on the bridge.

Later, we enjoy dinner together at a local restaurant before checking in to Lainston House, where we stay for the next two nights.

Today we visit the beautiful medieval city of Salisbury. Set in a quintessentially English landscape, this stunning city is renowned for its rich heritage and medieval cathedral which boasts the tallest spire in Britain. We discover plenty of treasures on our guided tour, including the world’s best-preserved copies of the original Magna Carta.

Later we enjoy a guided walking tour of the city, through the knot of pretty streets threaded together by a unique mix of architectural styles; from lovely half-timbered Tudor houses to handsome Georgian mansions.

Today we are welcomed into the beautiful Mapperton House in the stunning county of Dorset, home to Julie Montagu, Viscountess Hinchingbrooke, an American from a small town outside Chicago who married into the British aristocracy. Her husband is Luke Montagu, the son and heir to John Montagu, 11th Earl of Sandwich (whose relative invented the humble sandwich in the 18th century)! There are plenty of treasures to discover around the house while outside, the Italianate garden features an orangery, fountains, statues, colorful plants and lovely grottoes.

Later we check in to Bovey Castle, where we stay for the next two nights.

This morning we head to Slapton Sands, a lovely beach in Devon with a tragic past. American GIs were stationed here during World War II to train for the D-Day Landings. Taking place in April 1944, Exercise Tiger was one of the large-scale rehearsals which sadly resulted in the deaths of 749 American servicemen due to poor visibility, communication problems and a Nazi E-boat attack. The disaster was so awful that the American government didn’t want the public to know and the documents were only released 44 years later. We pay our respects to those who lost their lives at the Exercise Tiger Memorial before meeting a local historian on the beach.

Next we visit Drake’s Island in Plymouth Sound, open once again after several years. Take the chance to learn about the island’s history, enjoy the views across to Cornwall and keep a look out for the wildlife – especially the napping seals!

We then make our way to the Mayflower Steps, flanked by the British and American flags, which marks the final departure point of the passengers who journeyed to the New World. After leaving London in July 1620, the Mayflower anchored at Southampton for the planned rendezvous with the Speedwell, the second ship which was also supposed to depart for America. However, both vessels were forced to return to Plymouth after a leak was discovered on Speedwell. 20 Speedwell passengers joined the Mayflower and they finally set sail in September, reaching America after a gruelling 10 weeks at sea.

Later, we are treated to a special gala dinner in celebration of the Fourth of July at the Mayflower Sailing Club.

We start the day with a visit to Gloucester Cathedral, built in 1100 and home to one of the largest medieval stained glass windows in England and the tomb of King Edward II, who was murdered at Berkeley Castle. We discover the highlights and the crypt on our guided tour, and pay tribute to John Stafford Smith, the composer of The Star-Spangled Banner, who was an organist here.

This afternoon we take a tour of Civic Trust Methodist Churches in Gloucester and learn about their American connections. One of the highlights includes the St Mary de Crypt Church with its long and colorful history. First recorded in 1140, the church was used as an ammunition factory and store in the First English Civil War and also played host to the first sermon of George Whitefield, one of the founders of Methodism who is credited with taking the movement to America.

Later we check in to the Queens Hotel, where we stay overnight.

Leaving Cheltenham, we head to Oxfordshire for a visit to RAF Upper Heyford, which served as an American airbase during the Cold War. We find out more during our guided tour, while looking out for the local wildlife such as peregrine falcons, skylarks and buzzards.

American history is brought to life this afternoon as we visit Sulgrave Manor, a Tudor manor house built in the mid 1500s by Lawrence Washington, the great-great-great-great-great grandfather of George Washington, first President of the United States. Here we learn about the remarkable history of the Washington family on our guided tour. Restored and opened to the public in 1921, Sulgrave was presented to the people of Britain and the USA as a memorial of their common inheritance.It is widely referred to as the 'original home of the special relationship' and boasts fascinating exhibitions and some of George Washington's personal items, including his famous velvet frock coat.

Later we check in to Hartwell House & Spa, one of three Historic House Hotels of the National Trust, and enjoy a farewell dinner together.

*supplement applies for transfers from all other airports and other locations, including central London

Nights One to Three – Macdonald Windsor Hotel, Windsor
The Macdonald Windsor Hotel sits opposite the famous Windsor Castle, right in the heart of the historic town of Windsor. The classic interiors, with a contemporary edge, fit perfectly with the Georgian elegance of this townhouse hotel. The luxurious bedrooms are individually-designed and the hotel also offers a stylish bar and restaurant.

Nights Four and Five – Lainston House, near Winchester
Lainston House is a luxurious 17th-century hotel nestled in 63 acres of idyllic Hampshire countryside. The beautifully decorated bedrooms are the perfect place to relax, while the hotel also boasts two lovely restaurants and a bar with a sun terrace. Outside, you can enjoy stunning walks in the grounds.