In The Footsteps of Shakespeare

A Journey from London to Shakespeare Country 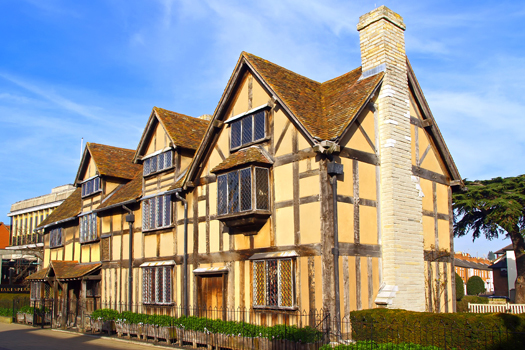 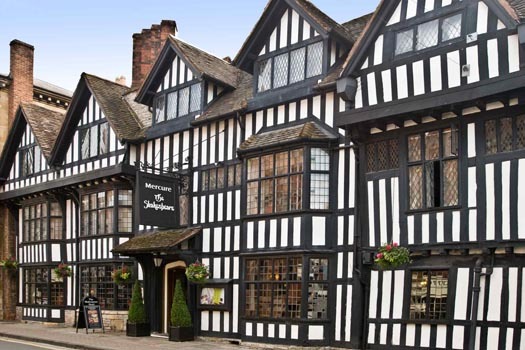 In The Footsteps of Shakespeare

A Journey from London to Shakespeare Country

A poet, playwright and actor, William Shakespeare is widely regarded as the greatest writer in the English language and the world's pre-eminent dramatist. This tour will provide a very real insight into Shakespeare’s life and times, visiting Stratford-upon-Avon, where he was born and grew up, and exploring other historic houses in the area associated with his story, as we discover pretty market towns and picturesque country villages. On our return south, we recreate the fabled journeys Shakespeare is believed to have taken to Oxford, the iconic city and world-famous seat of learning. A highlight of the tour will be the chance to attend performances at the iconic Royal Shakespeare Company Theatre in Stratford and at the Globe Theatre in London.

Special Extras included in your itinerary:

On arrival at Heathrow airport, a private transfer will take you to our overnight hotel, the Macdonald Windsor Hotel. In the evening you are invited to join the group for a welcome drink, followed by dinner.

Leaving Windsor we travel to Baddesley Clinton, an atmospheric, medieval manor house dating back to the 13th century, set timelessly in its own secluded parkland. This moated house and its extensive formal gardens are steeped in history, including its use as a place of hiding and refuge for Catholic priests in Shakespeare’s time.

We then head to Compton Verney for a guided tour of this award-winning independent art gallery. Housed in a restored Georgian mansion and surrounded by 120 acres of stunning 'Capability' Brown parkland, the world-class art exhibitions include several portraits relevant to Shakespeare’s age.

Afterwards we check in to the Mercure Stratford-upon-Avon Shakespeare Hotel, our base for the next five nights. Tonight we enjoy dinner together at the hotel.

Today we delve into the world of William Shakespeare as we discover some of his family homes, each place with its own fascinating story to tell. At Shakespeare's Birthplace we explore the extraordinary story of Shakespeare in the house where he was born and grew up in. Next is Holy Trinity Church on the banks of the River Avon, where Shakespeare was baptised, worshipped, and where he is buried. We end our tour at Anne Hathaway’s Cottage and Gardens, the setting of the young Shakespeare’s courtship with his future bride. Here we can see original furniture and uncover the stories of 13 generations of the Hathaway family who lived here. There are also nine acres of beautiful cottage gardens to enjoy.

The evening is free for you to make your own dinner arrangements.

This morning we visit Kenilworth Castle, one of England’s largest medieval fortresses and most impressive castle ruins. Robert Dudley, Elizabeth I’s ‘favourite’, created an ornate palace in readiness for her visit in 1575, resulting in a show of pageantry that was believed to be the inspiration behind Twelfth Night. The beautifully recreated Elizabethan Garden, lost to the world for over 400 years, is now open to visitors once more.

Next is Stoneleigh Abbey that grew from humble beginnings as a Cistercian monastery in 1154 into a comfortable family home following the Dissolution of the Monasteries in the 16th century. This magnificent stately home is comprised of two halves; the first is a fine example of a Jacobean house in red sandstone built from the ruins of the monastery, while the second (the West Wing) was designed by famous architect Francis Smith of Warwick in Baroque style. The house has played host to many famous guests over the centuries including King Charles I, Queen Victoria and novelist Jane Austen.

After dinner back at the hotel, we are treated to a fascinating Shakespeare-themed talk by a guest speaker.

While Stratford is synonymous with Shakespeare’s theatrical success, there lurks in nearby Charlecote Park’s history a far less respectable connection; the famous playwright is rumoured to have been caught poaching deer here. Home to the Lucy family for 900 years, this lovely Tudor manor is a real treasure.

We continue on to stunning Coughton Court. Home to the Throckmorton family for 600 years, Coughton is still very much a family home with an intimate feel. While the interior gives us a unique insight into the history of the Catholic faith in this country, the spectacular gardens feature a pleasant riverside walk as well as colourful rose displays.

We dine together back at the hotel this evening.

Today we head to the historic town of Warwick to visit the Lord Leycester Hospital, a collection of superb medieval timber-framed buildings that was, for nearly 200 years, home to Warwick’s medieval Guilds. It became a place of retirement for aged soldiers known as the Brethren in the reign of Queen Elizabeth I; a legacy that continues to this day.

We then head back to Stratford to attend a performance at the iconic Royal Shakespeare Company Theatre**.

The evening is free for you to make your own dinner arrangements.

** Please note that the itinerary is subject to change to accommodate performance schedules.

We check out of our hotel and make our way towards Oxford. It is believed that Shakespeare travelled to London via Oxford, and walkers have attempted to reconstruct ‘the Shakespeare Way’, tracking the route that he would have taken. Our route takes us via the picturesque Cotswold stone villages of Stow-on-the-Wold and Bourton-on-the-Water.

Historic Oxford is known as the city of dreaming spires and is famed for its world-renowned university colleges. We enjoy a guided walking tour to learn more about this unique city, its history, university and famous people.

We continue into London and check in to the Grange Tower Bridge Hotel, where we stay for the last four nights. The evening is left free to make your own dinner arrangements.

We start the day with a visit to the British Library, the national library of the United Kingdom. The library’s collections include more than 150 million items, in over 400 languages.

We then pay a visit to the British Museum, the first national public museum in the world, founded in 1753. The museum’s collection comprises over 8 million objects spanning the history of the world's cultures; from the stone tools of early man to 20th-century prints and we discover just a small selection of these with our audio guided tour.

The rest of the day is left free for you to explore at your leisure and make your own dinner arrangements.

Day 9
Monday: Tower of London Ceremony of the Keys, London and Southwark Cathedral

We begin our day at the Tower of London to witness one of the oldest and most colourful surviving enactments of its kind; the Ceremony of the Keys. Set amidst the mighty battlements of this ancient fortress, this hugely popular ceremony forms part of the traditional ‘unlocking’ of the Tower of London and dates back some 700 years.

We then enjoy a guided walking tour of the oldest area of London exploring the city’s beautiful architectural heritage along the way. We walk past the ‘Roman’ baths, past Middle and Inner Temple Gardens, Middle Temple Hall, then on to the Strand to see Samuel Johnson’s statue, St Clement Danes, before finishing on Fleet Street and ye Old Cock Tavern.

We then head to Southwark Cathedral, a place of Christian worship for more than 1,000 years and the oldest Gothic church in London. The cathedral has been witness to the changing events of London’s history from its site by London Bridge, which was for many centuries the only entrance to the City of London. The cathedral also has connections with Shakespeare's theatrical contemporaries.

The evening is left free for you to make your own dinner arrangements.

Heading south across the Thames, our first visit is to the Golden Hinde, a full-scale reconstruction of Sir Francis Drake’s world-famous sailing galleon which departed from Plymouth in 1577 in pursuit of treasures and riches in the south Atlantic and Pacific.

We then walk the short distance to Shakespeare's Globe where we enjoy a fascinating backstage tour to learn more about this iconic theater and its most famous playwright; from colorful stories of the original 1599 Globe to the faithful reconstruction process of the 1990s. We also visit the Globe Exhibition under the theater which further explores the life of Shakespeare, followed by a live demonstration and theater performance**.

Tonight, we enjoy a farewell dinner together back at the hotel.

*supplement applies for transfers from all other airports

Special extras included in your itinerary